Trains and railway lines have played such a huge part in shaping human history and industry as we know it today. And while we have since developed more effective ways to transport goods and ourselves across the world, many of us still fall for the romance of the rails. It’s this passion that has seen many railways continue to thrive despite these changes.

So, we’ve compiled a list of some of the greatest train journeys that you’ll find in the world today. Ranging across six continents and numerous countries, these 16 journeys represent some of the best rail journeys that travellers can experience.

Stopping in a variety of major popular tourist destinations including Los Angeles, (California), Flagstaff (Arizona), Albuquerque (New Mexico), Kansas City (Missouri) and Chicago (Illinois), the Southwest Chief is an incredible tour of the USA’s ‘old west’. A section of its journey follows the historic Santa Fe Trail where mountains, canyons, deserts, pueblos and ranches are plentiful. You’ll even journey through the famous Cajon Pass, a mountain pass between the San Bernardino Mountains and the San Gabriel Mountains in Southern California, and along the Mojave Desert, the driest desert in North America, in comfort. Bask in the views from your train carriage for the 43-hour journey, which currently has no Wi-Fi on-board, meaning you’ll be fully immersed in your surroundings. 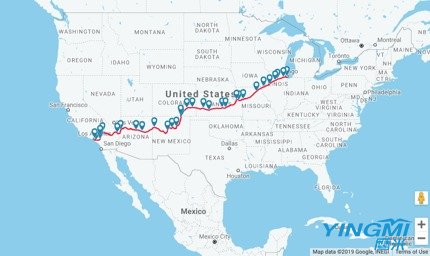 The route of Southwest Chief

The ‘First passage to the West’ route is our top favourite. The only passenger train that snakes its way from Vancouver to Banff via three stunning national parks (Glacier, Yoho and Banff), Rocky Mountaineer takes you through pristine lakes, remote plains, snow-capped mountains, and the Continental Divide of Americas which follows the ridge of the Rocky Mountains. A unique feature of Rocky Mountaineer is its oversized glass-dome windows; they provide the maximum connection between you and the stunning Canadian landscapes around you, so keep your eyes peeled, as you may catch glimpses of bears, elk and deer roaming across the vast countryside. The train journey takes two days with an overnight at a hotel in Kamloops. 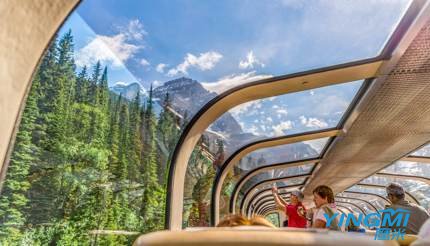 Enjoy the stunning views of the Canadian Rockies from your seat

Before the introduction of the line from Beijing to Lhasa in 2006, the Ferrocarril Central line was the highest railway in the world. Despite losing this status, it hasn’t lost its incredible charm. This high-altitude mountain railway line is an outstanding achievement of railroad engineering. Having been built under the auspices of US railroad entrepreneur Henry Meiggs, the line was started in 1870 but due to a lack of funding and the Peruvian-Chilean war, wasn’t finished until 1908. After falling into disarray under nationalisation, the line was privatised in the 1990s and has been continually improved in the intervening years by the Ferrocarril Central Andino consortium. The single-gauge railway stretches for 320km (200 miles), guiding travellers through precipices, gorges and into the Peruvian Andes. It operates from the capital, Lima, to its destination of Huancayo in the Peruvian highlands. For those worried about the altitude, the train handily features a nurse and oxygen masks too. The Chepe Express runs on the line known as the Chihuahua-Pacific Railway, or El Chepe, and it’s truly one of the great Latin American train journeys. Luxury is the chief differentiator between Chepe Express and other trains running on the same railroad – Chepe Express has reclining seats, a viewing terrace, a bar and lounge, and a double-storey restaurant car supervised by acclaimed chef Daniel Ovadia – you will be well-fed by the time the train ends in Los Mochis at 3:05pm, 9 hours after leaving Creel.

One of the most luxurious ways to travel across South Africa is via the famous Blue Train. It travels from Pretoria in the north-east to Cape Town in the south-west. The oldest of the nation’s luxury trains (first introduced in 1923), the Blue Train retains an antiquated style and fittings that have only been amended to keep it to modern standards. The carriages are soundproofed and carpeted, a butler service is provided, there are dining cars, and every room comes with an en-suite. It is, essentially, a moving five-star hotel that has temporarily housed world leaders and royalty over the years. Thus, it is on the bucket list of many a traveller. While much slower than grabbing a flight between the two cities, it is undoubtedly the most stylish way to get across the country, plus you will be treated to a glorious moving portrait of South Africa’s landscape. Keep in mind that the dress code is smart casual during the day and smart at dinner. 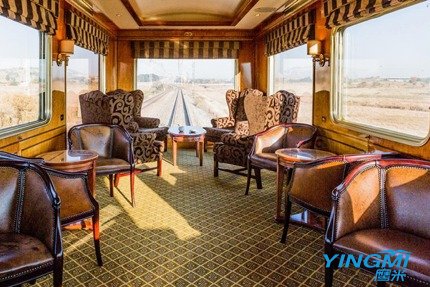 The Shongololo Express is a rather a luxurious experience and can accommodate up to 72 travellers on 12 and 15-day journeys through South Africa, Eswatini (formerly Swaziland), Mozambique, Zimbabwe and Namibia. The name ‘Shongololo’ is, rather charmingly, derived from the Zulu word for a large brown millipede – analogous to the train’s appearance as it winds its way through the incredible landscapes of southern Africa. The train primarily travels at night before arriving at destinations at dawn to allow travellers to disembark and enjoy a wide variety of activities.

This unforgettable railway offers an incredible trip across rivers, over bridges, through tunnels and even along the tallest vertical rock face in Europe. Taking you from Gudbrandsdal Valley’s mountain station in Dombas to the lovely fjord town of Andalsnes, the Rauma Line offers stunning sights. It runs along and across the beautiful Rauma River that is surrounded by lush greenery and snow-capped mountains and will make a quick stop at Trollveggen, allowing keen photographers a chance to snap some memorable photos. Despite running throughout the year as a whole, the sightseeing season operates from May 30 to August 30. 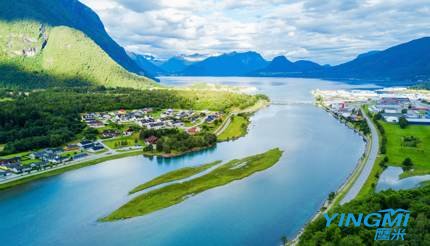 The town of Åndalsnes, where the Rauma Line ends This wondrous 1,363km (847 miles) railway line will take you from the centre of Sweden to its colder northern regions. Several package tours are available, but the “Discover Inlandsbanan” program is by far our top favourite – it includes travelling through bear forests, cycling in Östersund, journeying to the arctic circle, as well as taking a guided midnight-sun tour to the mining town of Malmberget and Mount Dundret (days are longest from June 4 to July 9). The train also comes with helpful hosts who are very knowledgeable about the surrounding areas. Terrific for those who want a backpacking adventure, the line is only open between June and August, so plan accordingly. The Flåmsbana is one of the steepest railways in the world, it also happens to be one of the most beautiful too. You’ll constantly be amazed by the sights as you journey through snow-capped mountains, observe farms that look like they’re about to disappear off the cliff’s edge and be mesmerised by its many waterfalls and waterways. The train even winds its way through a rather incredible spiral tunnel. At the bottom of the mountain, you’ll find the beautiful Flåm Valley and you’ll also find one of the world’s longest fjord there too – Aurlandsfjord. The journey ends at the high mountain station of Myrdal. It’s quite short, lasting only around an hour and covering just 20km (12.5 miles), but it’ll leave a lasting impression. 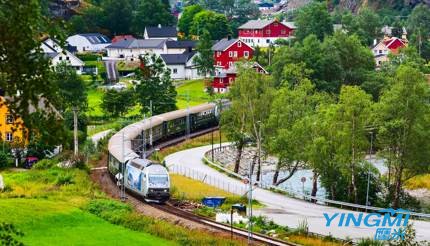 The incredible Bernina Express negotiates 55 tunnels and 196 bridges, taking you from the grandeur of Swiss Alps to sunny Italy in just 4 hours. For most of its journey, the Bernina Express runs along the UNESCO-listed railway line from Thusis – Valposchiavo – Tirano. Watch out for the famous Brusio Spiral Viaduct between Poschiavo and Tirano, as well as various vineyards and orchards on the way to Italy. Launched in 2006, the Beijing to Lhasa Express is an increasingly popular route for those who want to journey through China into the mountains of Tibet. The entire journey takes about 40 hours to complete its 3,757km (2,334 miles) journey – and in that time it crosses eight provinces from Northern China Plain to the world’s highest Qinghai-Tibet Plateau. The train doesn’t allow hop-on and hop-off unless you buy different train tickets for various sections. The section between Xining and Lhasa is particularly stunning – taking you through the shimmering Qinghai Lake to the snow-capped Tanggula Mountains, before reaching highs of 5,072m (16,640ft) on the Lhasa side of the Tang La Pass. 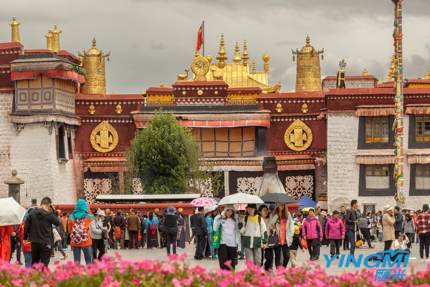 Sri Lanka is one of the world’s most beautiful countries, and taking a train in Sri Lanka is an inexpensive and hassle-free way to see the country.

The Kandy to Colombo line whisks you from the biggest city in Sri Lanka to the UNESCO-listed Kandy. You will travel through the gorgeous hills of ‘Tea County’. At Kandy, you will find lovely local markets, stroll along Kandy Lake, see the incredible Temple of the Sacred Tooth and take in the Royal Botanic Gardens (a holdover from British rule). In fact, it was the British that brought the railway systems to Sri Lanka – mainly to transport coffee and tea on the same train route to Colombo for international shipping. Northern India has many splendid sites and the best way to cram all of this in is via the Maharajas’ Express leaving from Delhi. This expensive, luxury train literally rolls out the red carpet for its guests before departing on its journeys. Two tours are available – the Indian Panorama and the Indian Splendour – both are equally excellent and both make a stop at Agra where you will get to visit the magnificent Taj Mahal. 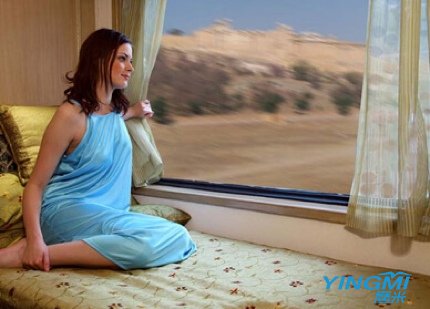 Perhaps the most famous railway in the world, the Trans-Siberian is over a century old and there is a reason it has endured and continues to be so prominently featured on people’s Bucket Lists. Clocking in at 9,289 km (5,772 miles) the Trans-Siberian is the longest railway line on earth, offering a plethora of amazing and diverse views that span across seven time zones. Highlights include the Yaroslavl (a UNESCO World Heritage site), the Ural Mountains, the jaw-dropping peaks surrounding Krasnoyarsk, Lake Baikal (the deepest lake in the world) and many, many more sights as you travel across the full breadth of Russia. There are also secondary routes on the way, such as the Trans-Manchurian and the Trans-Mongolian railways, both are worth journeying on too. 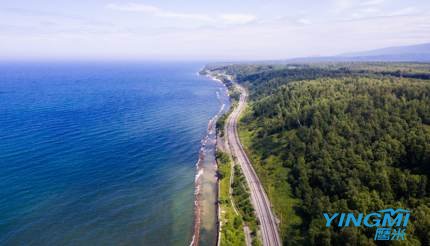 The railway track along Lake Baikal

Last, but not least, we come to Australia and The Ghan, an incredible rail journey that starts in Adelaide, South Australia, and ends at Darwin in the Northern Territory. This 90-year-old service takes passengers across 3,000 km (1,864 miles) in 54 hours and cuts across some of the most remote portions of Australia, specifically the incredible Red Centre and Alice Springs. There is a variety of packages and trips on offer here – everything from a near-direct journey across a few days to trips spread out across three weeks. The Ghan in Alice Springs, Australia